The team of Dancing Digger drivers are highly trained to perform incredible digger stunts. It hardly needs saying that these stunts are not something you would try at work or hire a digger and have a go at in the back garden!

Since its formation the Dancing Diggers have spawned several copy-cat teams, but there will only ever be one official JCB Dancing Digger Team.

The display routines, performed mainly by the extremely versatile JCB 3CX backhoe loader, have been perfected over many hundreds of digger hours. Not only that but the machines used have been specially modified for use by the Dancing Diggers. 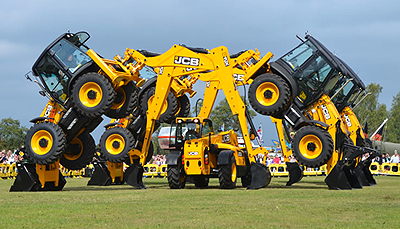 With their precision moves and hydraulic manoeuvres, the Dancing Diggers never fail to amaze audiences, both trade and public, wherever they perform.

A real highlight of the show is when all the diggers are lifted clear above the ground using their mighty hydraulic systems whilst another JCB passes beneath their honour guard.

It is especially vital for a huge exporter, in fact the largest industrial exporter in the Midlands and the third-largest construction equipment manufacturer on the planet, to showcase its products.

JCB employs over 10,000 staff and exports its diggers to virtually every country on the map. The JCB Dancing Diggers Display Team are a vital component of the iconic company’s public relations.