There are several different types of digger all designed for different work environments and for carrying out specific jobs.

This incredibly compact and versatile vehicle was invented in the UK by J C Bamford in 1953. The backhoe loader is also known as a backhoe and a digger as well as by the trademark JCB initials.

The JCB digger is a triumph of vehicle engineering. Widely used in many industries, though mainly construction, the digger is conceptually straightforward; its basically a tractor with a front bucket and backhoe attached.

A digger’s front bucket can typically be used for loading whilst the backhoe is used for digging. This vehicle, unlike some other types of digger, can be driven on the road as well as used on site. The digger driver can switch functions easily with the aid of a revolving seat in the cab.

When digging, the JCB can lower its hydraulic stabilizers and front scoop to give greater stability. The hydraulic systems employed in these digging machines allow them to exert tremendous forces and dig holes and trenches quickly and easily. 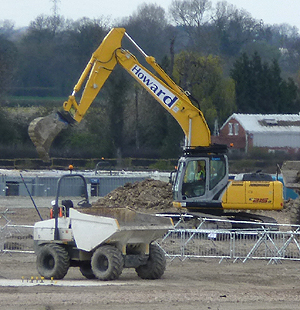 Excavators have just one arm at the front of the cab. The arm is made up of two sections called the boom and stick with a bucket at the end. The cab is mounted on a revolving platform with either tracks or wheels beneath.

The modern hydraulic diesel excavator developed from the steam shovel patented by William Otis in 1839. The steam shovel was very widely used in the construction of railways.

Common uses for excavators include grading, landscaping, digging and demolition. Some of the largest excavators are used in the mining industry. Smaller mini excavators are used in restricted spaces and some are even designed to fit through doorways and narrow gates. Mini diggers and most wheeled excavators have a blade at the front used for pushing muck and aggregates in a similar way to a bulldozer. 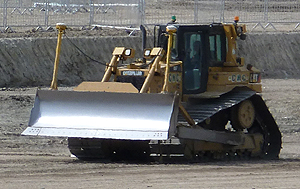 The bulldozer developed from the farm tractor, its use first becoming widespread in America from the 1920’s. The first commercial bulldozer was the Caterpillar Sixty Horsepower, or Cat 60, developed by Holt in California. Holt subsequently merged with Best in 1925 to form the now legendary Caterpillar Tractor Company.

The word bulldozer is believed to derive from the term a ‘bull-dose’ meaning a large measure of medicine, and is sometimes shortened to just dozer.

As well as different front blades for different tasks, bulldozers are often fitted with claw-like rear ripper attachments for breaking up hard surfaces. The bulldozer’s wide tracks help it to traverse the most challenging terrain without assistance, a fact that has led to its adoption by the military in armoured versions. In fact, the bulldozer is the forerunner of the modern tank.

The Loadall was first introduced to universal acclaim by JCB Excavators Ltd in 1978, though similar vehicles have been developed by Caterpillar and Manitou. The loadall is also known as a telescopic handler or telehandler.

Compact and versatile the loadall is widely used in construction and agriculture. The loadall has an extendable pivoting arm or boom with, usually, a forklift attachment. It is ideal for lifting pallets stacked with bricks or other heavy materials and raising them to inaccessible heights with great efficiency, relative safety and exact precision.

Other attachments for the loadall include the shovel, grapple and bale lift.

The wheel loader, or front loader, is a large, powerful vehicle usually fitted with a big front bucket or scoop. Wheel loaders are used in the construction, mining and logging industries.

The front loader has a large bucket which can be raised, lowered and tilted for tipping. This makes them ideal vehicles for loading trucks with loose materials such as sand, rubble, rock or aggregates. When fitted with a claw, wheel loaders can efficiently be used to lift, carry and load logs.

The skid steer or skid loader is capable of turning in its own tracks making it extremely useful in tight situations. Although it has four-wheel drive, the wheels on each side of the vehicle can turn in opposite directions simultaneously.

The first skid steer was made by US company Melroe Manufacturing in 1960. It was called the Bobcat, a name which is now used generally to describe this type of small digger.

The skid steer can be fitted with a variety of tool attachments. Used as a front loader its compact front bucket can push, load and carry.